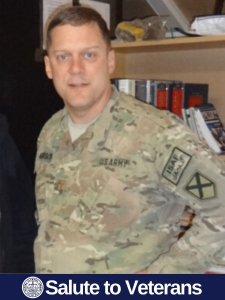 Michael Anderson is an Assistant United States Attorney for the Southern District of Alabama in Mobile. Anderson has been in the National Guard, Army Reserve and Marine Reserve. Anderson deployed with a Marine Force Reconnaissance Company during Operation Desert Shield/Desert Storm. He actually dropped out of his first semester of law school at Cumberland to deploy. Upon his return he started again in the next law class. Anderson deployed to Afghanistan in 2013-2014 with the Alabama Army National Guard. He is currently the Chief of Military Justice for the 167th Theater Sustainment Command.