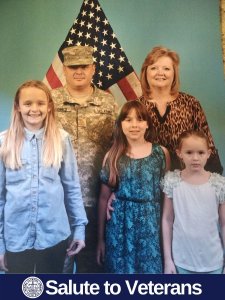 Donnie Hughes, Jr. first joined the military on his 17th birthday. After graduation from Corner High School in Jefferson County, he reported for basic training in the Summer to Ft. Knox Kentucky. He was a Private and would serve as a Cavalry Scout in the Army with the 1/3rd Armored Cavalry in Ft. Bliss & later with the 152nd Armor in the Alabama National Guard where he would become a Sergeant and serve as a Gunner on a Bradley. As a Gunner, he would shoot a perfect score of 1000 points out of a possible 1000. Coincidentally my Bradley Commander was 1st Lieutenant Steven Shepherd who is now a Full Bird Colonel in the Alabama National Guard & a member of the Alabama State Bar as well.

Hughes took a break from the Army during Law School, but gravitated back to soon after graduating from Cumberland and passing the bar exam. He earned a direct Commission in the Army Reserves in 2003 to start a new chapter in his military career as a member of the JAG corp. He now serves as a Major in the Alabama Guard with the 135th ESC in Birmingham. He calls himself a Soldier for life and truly considers it a blessing every time he puts on his uniform.