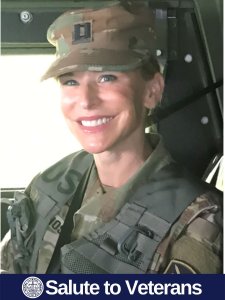 CPT Amy Quick Glenos serves as Trial Counsel for the 167th Theater Sustainment Command at Fort McClellan, Alabama. She received a direct commission as an officer to the Alabama Army National Guard in 2016. On the civilian side, she is an attorney with the international labor and employment firm of Ogletree, Deakins, Nash, Smoak & Stewart, P.C. Her practice focuses on the representation of management in all phases of employment-related disputes and litigation. She is a former law clerk to the Honorable James H. Hancock, United States District Judge, and also served as the Court Law Clerk to the United States District Court for the Northern District of Alabama, reporting to Chief Judge Karon O. Bowdre.