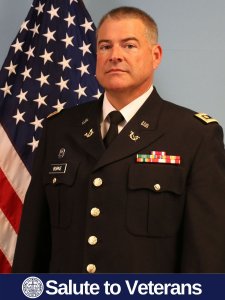 Major Liles Burke is a JAG officer in the Alabama Army National Guard . He is assigned to Joint Forces Headquarters in Montgomery, Alabama, where he is the Deputy Staff Judge Advocate. In civilian life Major Burke is a United States District Judge for the Northern District of Alabama with a duty station at the Huntsville, Alabama United States Courthouse.