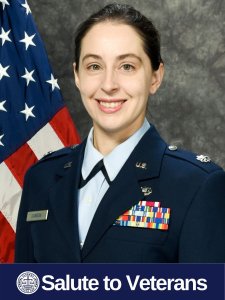 Lt. Col. Carlissa Carson is currently the Staff Judge Advocate for the 117th Air Refueling Wing in Birmingham, AL. She joined the Air National Guard in 2012 after serving nine years in the Army Reserve. In the Army, she served as a Military Intelligence officer, and later, as a Judge Advocate.