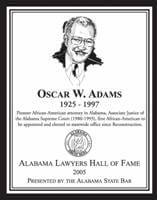 Oscar Adams, Jr. was born on February 7, 1925 in Birmingham, Alabama. He attended public schools in Birmingham and graduated from Talladega College. His father was a newspaper publisher of The Birmingham Reporter from 1900 to 1933. His great grandfather, Frank Threatt, was a member of the Alabama Legislature from Marengo County during the Reconstruction Era.

Oscar graduated from Howard University Law School in Washington D.C. in 1947. He returned to Alabama to practice law. His career as a lawyer spanned more than thirty years. In 1966 he became the first African American member of the Birmingham Bar Association.

Oscar Adams was recognized as an expert in the area of civil rights and his firm became one of the leading firms in the nation for handling complex civil rights litigation. Lawyers who were associated with Oscar Adams over the years included: U. W. Clemon, United States District Judge; James K. Baker, Birmingham City Attorney; J. Richmond Pearson, State Senator and Circuit Judge; Demetrius C. Newton, Municipal Judge and State Legislator; and Caryl Privett, U.S. Attorney and Circuit Judge, among many others.

On October 10, 1980, Governor Fob James appointed Oscar Adams to the Alabama Supreme Court. He became the first African American to serve on any appellate court in the State of Alabama. In 1982 and 1988 he was elected to full terms on the Supreme Court and became the first African American to be elected to a state-wide constitutional office in the history of Alabama.

Justice Adams served the people of Alabama well on the Supreme Court. He had great legal abilities, was a person of deep resolve, and was committed to the law. After he left the Supreme Court, he continued his service as Co-Chair, along with former Governor Albert Brewer, of the Second Citizen’s Conference on Judicial Elections and Campaigns. He also remained active in many civic and professional organizations.

But what about Oscar Adams the person? Nominator Mark White stated that Justice Adams loved gardening, cooking, and music. But Justice Adams cautioned that roses, ribs, and jazz should not be attempted by amateurs. Also, Justice Adams was probably more proud of having been published in Southern Living than in the Southern Reporter.

Oscar Adams was a true trail blazer who did not give up on the Rule of Law nor did he doubt that the Law could correct injustices in society. For all of his accomplishments, he is honored as a member of the Alabama Lawyers’ Hall of Fame. 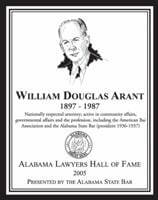 William Douglas Arant was born on a farm in Waverly, Alabama on May 18, 1897. He lived until the age of ninety and was still coming to the office until a few months prior to his death in October 1987.

Throughout his career, Mr. Arant was first and foremost a lawyer. He was elected to the Presidency of the Alabama State Bar in 1936 after having served previously on the Board of Bar Commissioners from 1931 to 1940. He was named the Birmingham Bar Association’s Lawyer of the Year in 1976.

Mr. Arant received his early education in Alabama. He enlisted in the United States Army in 1918, and was commissioned a Second Lieutenant in 1919. He graduated from the University of Virginia in 1920. And he received his law degree from Yale University in 1923 where he served as Editor in Chief of the Yale Law Journal. He was elected to Phi Beta Kappa as well as the Order of the Coif.

In 1923, he joined the firm of Tillman, Bradley & Baldwin in Birmingham, Alabama. He became a partner in the firm in 1927 and a name partner in its successor in 1945. At the time of his death the firm name was, and remains today, Bradley, Arant, Rose & White.

Law was not just a job to Mr. Arant. It was, as he saw it, a profession whose responsibilities extended far beyond day to day case work. Mr. Arant was an organizer of the Legal Aid Society of Birmingham, which he served as its president. He also sponsored the first African American for membership in the Birmingham Bar Association. That young attorney would later become Justice Oscar Adams, a Justice of the Supreme Court of Alabama, and the first African American elected to statewide office in Alabama.

Mr. Arant served his country in various positions including Chief Counsel for the Petroleum Administration Board of the National Recovery Administration in Washington D.C. He also served as Chairman of the Regional Labor Board in Atlanta, and as a member of the Board of Appeals of the Selective Service System in Alabama. He was President of the Birmingham Civic Symphony Association and the Birmingham Civic Opera Association.

Mr. Arant’s honors, in addition to those previously noted, included election to the Alabama Academy of Honor in 1978 and induction into the Birmingham Business Hall of Fame in 1993.

Mr. Arant was among Alabama’s pre-eminent lawyers of the 20th Century and he is now honored with induction into the Alabama Lawyers’ Hall of Fame. 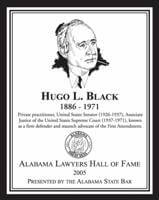 Hugo L. Black was born February 27, 1886 in Clay County, Alabama. Though he sometimes referred to himself, especially on the campaign stump, as a Clay County hillbilly, he reached the pinnacle of the legal profession by serving for more than thirty-four years on the United States Supreme Court.

Black graduated from the University of Alabama School of Law in 1906 and moved to Birmingham to practice law in 1907. He became successful in criminal defense, as a prosecutor, in labor law, personal injury, and other representations for clients. He served inthe United States Army during World War I, and attained the rank of Captain.

In 1925, Senator Oscar W. Underwood announced his retirement from politics and a number of candidates, including Hugo Black, began campaigning for his Senate seat. He campaigned vigorously in every county of Alabama and in 1926 he was elected United States Senator.

As a Senator, Black was progressive. In 1932 he easily won re-election and became a strong supporter of Franklin D. Roosevelt’s New Deal. He championed minimum wage laws, medical aid to the indigent, and Social Security. When the Supreme Court blocked many New Deal programs, President Roosevelt sought to increase the number of Supreme Court justices. However, in March 1937, Congress passed the Supreme Court Retirement Act which allowed justices to retire at age 70 with full pay. An aging justice soon retired and President Roosevelt named Hugo Black to the Court.

While in the Senate, Hugo Black had supported the role of the Federal Government in assuring certain basic guaranteed rights of citizens. On the Supreme Court, he again sought to protect the rights of citizens guaranteed in the United States Constitution and the Bill of Rights. He took part in important decisions involving news censorship, prayer in public schools, civil liberties, one man-one vote, and the equality of educational opportunities.

Justice Black’s was one of the unanimous votes in the Brown vs. Board of Education case. Many people in Alabama disagreed with him and criticized his action. He was socially shunned. His trips to Alabama became fewer. His law school class did not invite him to his 50th Class Reunion in 1956. Despite the estrangement with Alabama, he remained faithful to his view of the Law and the Constitution.

In later years, there was a new look at the opinions of Justice Black by Alabamians. In 1966 he was invited back for a tribute dinner in Birmingham. In 1968, he addressed the State Bar Convention.

Hugo Black died in September, 1971. He has been recognized as the intellectual leader of the Supreme Court during his 34 years of service. The nation honored him by his burial in Arlington National Cemetery. The lawyers of Alabama honor him with induction into the Alabama Lawyers’ Hall of Fame. 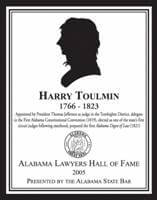 Harry Toulmin was a pioneering settler of Alabama and one of the prominent early legal figures of the Territory and the State. Toulmin was born in 1766 in Taunton, England. He came to the United States in 1793. He became President of Transylvania College in Lexington, Kentucky and in 1796 was appointed Secretary of State of Kentucky.

Toulmin supported Thomas Jefferson for President and he was rewarded in 1804 when President Jefferson appointed him Judge of the Superior Court in the Tombigbee District of the Mississippi Territory. He was the second judge to have this appointment but because his predecessor only served six months and did not hold court in present-day Alabama, Toulmin became the first United States Judge on what is now Alabama soil.

Judge Toulmin was a remarkable man who because of the sparsely populated Alabama wilderness wore many hats. He served as judge, postmaster, minister, and physician. His tenure as judge extended through the existence of the Mississippi Territory until Mississippi became a state in 1817, and then continued through the time of the Alabama Territory – 1817 to 1819. He became a member of the Alabama Constitutional Convention of 1819, and was one of the prime movers behind Alabama’s statehood.

Toulmin continued to influence the law of Alabama in a most important way. He compiled the first Alabama Law Digest in 1823.

Harry Toulmin served Alabama well for many years. One of his sons became a prominent legislator for twenty-five years. A grandson followed in his footsteps and served as a Federal District Judge from 1886 to1916. Other descendants have continued to serve our state. We now honor the progenitor of this great family with his induction into the Alabama Lawyers’ Hall of Fame.