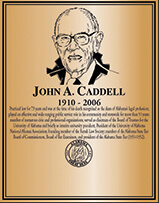 John A. Caddell was born in Tuscumbia, Alabama on April 23, 1910.  His family soon thereafter moved to Decatur.  John was educated in the Decatur public schools, earned an undergraduate degree from the University of Alabama in 1931, and received a law degree from Alabama in 1933.  He began his practice of law in Decatur which did not end until his death on February 7, 2006.

Throughout his career Caddell was an outstanding lawyer and a dedicated public servant.  His skill and knowledge of the law were recognized locally and state-wide as he represented individual, corporate, and governmental clients.

John Caddell was a leader in his community.  He worked to expand local health facilities, hospice programs, stronger support for education, industrial development, and efforts to improve and strengthen racial and community relations.  He was recognized for his work with the United Way of Morgan County, the Morgan County Minority Development Association, and the Decatur Board of Education by the naming of an elementary school in his honor.

John A. Caddell served his state, his community, his profession, and his fellow man.  As his nominator for the Hall of Fame stated, he strove for “compassion and excellence in all things”.  He accepted the honor and privilege of practicing law with its corresponding obligations of honesty, dedication, and service. 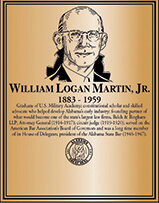 William Logan Martin, Jr. was born in Scottsboro, Alabama on February 20, 1883.  He graduated from the United States Military Academy at West Point and then earned a law degree at the University of Alabama in 1908.  From 1909 to 1910 he was Assistant Solicitor of the City Court of Montgomery and from 1911 to 1914 he was an Alabama Assistant Attorney General.  From 1914 to 1917 Martin served as Attorney General of the State of Alabama.  He resigned this office when the United States entered World War I and he re-entered the army.  Martin returned to Montgomery in 1919 and was appointed a Circuit Court judge for Montgomery County.  In 1920 his career changed direction when he moved to Birmingham to practice law.  In 1921, he became the attorney for the Alabama Power Company.  And in 1922, he established the law firm which became today’s Balch & Bingham LLP, where he practiced law until his death in 1959.

Judge Martin was a zealous advocate for his clients, particularly the Alabama Power Company.  He became a constitutional scholar of national renown.  In addition to being committed to his clients, he held leadership positions in the Alabama and American Bar associations.  He served as President of Alabama State Bar for the 1946-1947 term of office.   He was a delegate to the American Bar Association from Alabama from 1937 to 1959.  And he served on the ABA Board of Governors from 1943 to 1946.

Martin incorporated the Southern Research Institute in 1941.  He was a member of the Alabama Power Company Board of Directors from 1951 to 1959.  And the company recognized his many contributions by naming the Logan Martin Dam and its resulting lake in his honor.

For his lifetime of public service as an army officer, Alabama Attorney General, a Circuit Court Judge, bar association leader, and prominent corporate attorney the lawyers of Alabama are proud to include William Logan Martin, Jr. as a member of its Lawyers’ Hall of Fame. 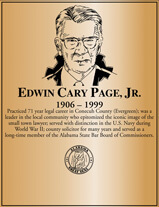 Edwin Cary Page, Jr. was born in Evergreen, Alabama on October 12, 1906.  He attended the University of Alabama for undergraduate and law school education graduating in May of 1928. He joined the Alabama State Bar in June of 1928 and practiced law for his entire career in Evergreen, Conecuh County, Alabama from 1928 until his death in 1999, a period of more than 70 years.

Edwin Page was an exemplar of being a small town Alabama lawyer who served his community, state, nation, and profession over the course of his lifetime.  He was County Solicitor for Conecuh County from 1934 until the time he joined the United States Navy in 1943.  He served in the navy from November 1943 to November 1945.  Upon his return to Conecuh County in 1945, he resumed the position of County Solicitor.

Among his many positions of service, Mr. Page was an Elder of the Evergreen Presbyterian Church.  He was Chair of the Conecuh County Democratic Executive Committee from the late 1930’s until 1964. And he served as a Commissioner for the 35th Judicial Circuit on the governing body of the Alabama State Bar, the Alabama Board of Bar Commissioners, from 1965 to 1984.

Edwin Cary Page, Jr. died on June 21, 1999 in Montgomery, Alabama. He was a good citizen and a committed leader. The lawyers of Alabama are proud to induct him into the Alabama Lawyers’ Hall of Fame. 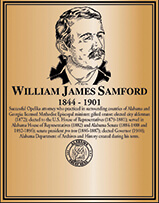 The life of William James Samford exemplifies the State Bar motto, “Lawyers Render Service.” Born in Greenville, GA in 1844 but raised in East Alabama, Samford gave a lifetime of service to our state: as a soldier, as a lawyer, as a legislator and as its Chief Executive.

Samford was first called to service as a soldier. At the age of 17 Samford enlisted as a Private in the 46th Alabama Regiment, rose to the rank of first lieutenant, and was the youngest company commander in the regiment. Samford was captured in May of 1863, and was held for 18 months as a prisoner of war. After a prisoner exchange, Samford returned home – but only briefly – before a call to duty and a love for his men urged him to set out on foot to reunite with his unit in North Carolina. After the war he returned to Alabama a Confederate hero.

Samford was then called into service for his clients as a lawyer. He was admitted to the Alabama Bar in 1867 and moved his family and law practice to Opelika in 1872 where he built a successful practice. It was said of Samford: “In preparing for a case, all sight was lost of self, until he had thoroughly investigated every phase of the subject. He was rarely ever surprised in the trial.” Samford had a gift of the oratory and enjoyed a reputation as a “direct, plain spoken, honest Christian gentlemen.”

While a lawyer, Samford was also called to service in politics at virtually every level, from local to federal. Samford began his political career as an Opelika City Alderman, and, at the age of 30, became the youngest delegate to the Constitutional Convention of 1875 where he served on the Finance Committee.

In 1878 Samford was elected to the United States Congress and served one term. He did not seek reelection, but rather returned to Alabama, believing that he could do more good for Alabama people by serving them closer to home. While resuming the practice of law in Opelika, the surrounding counties, and the state of Georgia, Samford continued his involvement in state politics by winning election to the Alabama House of Representatives in 1882 and by serving in the Alabama Senate for terms in 1884-1888 and 1892-1896. In 1896 he was appointed a Trustee of the University of Alabama.

In 1900 William James Samford reached the peak of political service by becoming Governor of Alabama. During the election, the Athens Courier wrote, “There are few, if any men, in public life, with so enviable a reputation as this grand Christian gentleman.” He was warmly referred to as the “People’s Governor.” However, his health was fragile due to a heart condition and he died on June 11, 1901, having served as Governor less than a year. A notable accomplishment of Samford’s term was the establishment of the Alabama Department of Archives and History to house the public records and artifacts of the state. 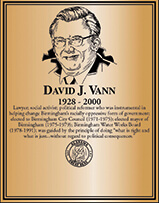 David J. Vann was born on August 10, 1928 in Roanoke, Alabama. At an early age he moved to Auburn with his widowed mother where he attended high school before joining the army. After his military service he enrolled at the University of Alabama where he received a Bachelor of Laws degree in 1951. He later obtained a Master of Laws degree from George Washington University in 1953.  United State Supreme Court Justice Hugo Black hired Vann as his law clerk. In 1954 the Supreme Court issued its landmark ruling in Brown v. Board of Education and David Vann was present at the Court for the reading of that decision.

Vann returned to Alabama to practice law in Birmingham as the Civil Rights Movement continued to gain momentum.  It was during this time that he took a leading role as a young lawyer in the actions that led to a referendum which resulted in the transformation of Birmingham’s Commission into a Mayor-Council form of government. He became a special assistant to new mayor Albert Boutwell.

Before venturing into politics as a candidate for public office in his own right, Vann was a plaintiff as well as attorney of record in another landmark case, Reynolds v. Sims, which enshrined the principle of “one person, one vote” into the jurisprudence of the United States Supreme Court.

In 1971 he was elected to serve on the Birmingham City Council for a single term before becoming Mayor of Birmingham in 1975. While he left the Mayor’s office in 1979, he continued his service to the city on the Birmingham Water Works Board which began in 1978 until 1991, serving over 11 years as Chairman. Among a lengthy list of other accomplishments, Vann led the effort to establish the Birmingham Civil Rights Institute during the Arrington administration and he became that mayor’s lead attorney in an aggressive annexation campaign which brought commercial properties into Birmingham’s corporate limits to strengthen its tax base.

David J. Vann died in Birmingham on June 9, 2000. For his abilities as a lawyer, the courage of his convictions, and his service to his state he is inducted into the Alabama Lawyers’ Hall of Fame.