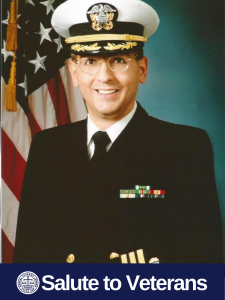 After law school graduation in 1990, David immediately entered the United States Navy as an Ensign in the Judge Advocate General’s Corps. From there, he served in several roles across the country, including: Trial Counsel, Senior Trial Counsel, Staff Judge Advocate, Training Officer, Executive Officer, Legal Assistance Department Head and Legal Counsel. He left active duty in 1995, and continued his service as a member of the Navy Reserve in numerous capacities and units across the country. David retired as a Commander in the U.S. Navy Reserve Judge Advocate General’s Corps on 1 August 2017. David’s personal decorations include the Navy-Marine Corps Commendation Medal (six awards) and the Navy-Marine Corps Achievement Medal (two awards), as well as various unit and service awards and commendations. He is also qualified as an Expert Marksman with both rifle and handgun.