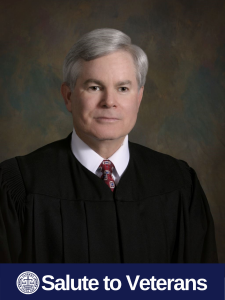 RETIRED CIRCUIT JUDGE AND BRIGADIER GENERAL JOHN THOMAS (TOM) KING, JR. Retired Circuit Judge and Brigadier General John Thomas (Tom) King, Jr. served
32 years in the United States Army and Alabama National Guard. By all accounts, during his commands dating from 1989-2003, King trained, mobilized, and deployed more soldiers than any commander in the history of the Alabama National Guard.
General King was commissioned a 2LT as a Distinguished Military Graduate on August 15, 1971, concurrent with his graduation from The University of Alabama. During his two years on Active Duty, King served in the Republic of South Vietnam and was awarded the Bronze Star Medal, Vietnam Service Medal, and Vietnam Commendation Medal.
Upon entering The Cumberland School of Law in 1973, he joined The Alabama Army National Guard where he served for seven years as Briefing Officer for a Two-Star Commander, during which time he briefed more than 200 General and Flag Officers.
King served as a Battalion Commander from 1989-93, training, mobilizing, and deploying all nine logistical units (more than 1,000 soldiers) under his command to Desert Shield-Desert Storm.
As a Group Commander from 1995-97, King trained, mobilized, and deployed more than 2,000 logistical soldiers to Southern Command in support of the Active Army’s retrograde from the Panama Canal Zone. King simultaneously mobilized and deployed a Maintenance Company of 211 personnel to Croatia and Hungary in support of Allied Forces in the First Russian-Chechen War.

In his final assignment as Deputy Commanding General of a 4,400 personnel command, General King was tasked with training logistical commands across the state without disclosing the ultimate deployment order by The Commander-in-Chief to initiate Operation Iraqi Freedom that resulted in the removal of Saddam Hussein.
Notably, throughout these commands, King continued to practice law and, beginning in 2001, served as a Circuit Judge in Jefferson County.
General King graduated from both the Army War College and Air War College. Upon his retirement in 2003, he was awarded The Legion of Merit.