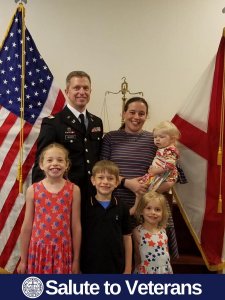 Opelika attorney and Major Elijah T. Beaver currently serves as the Command Judge Advocate for the 20th Special Forces Group (Airborne). He has deployed twice to the Middle East: in support of peacekeeping operations in Egypt, and as part of the Global War on Terror to Kuwait, Jordan, and Qatar. His success as an officer and as an attorney is due in large part to the support of his wife Erin, an educator with Opelika City Schools.