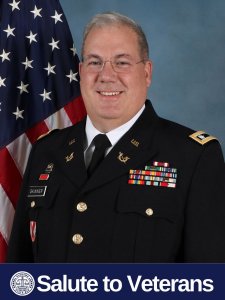 Lt. Col. Thomas “Jay” Skinner is an attorney and founder of the Law Offices of Thomas J. Skinner, IV, LLC, with offices in both Birmingham and Valley Head, Alabama. He received his B.S. in Commerce and Business Administration with a major in Real Estate from the University of Alabama in 1990, and his J.D. from Cumberland School of Law at Samford University in 2003. Lt. Col. Skinner serves in the Alabama Army National Guard as the Deputy Staff Judge Advocate at the 167th Theater Sustainment Command. In that position, Lt. Col. Skinner assists the Staff Judge Advocate in advising the command on legal matters, oversees the daily operations of the legal section and staff, and serves as a mentor and guide for the junior legal officers in the command. In 2013, Lt. Col. Skinner deployed with the 135th Expeditionary Sustainment Command to Kuwait and Qatar in support of Operation Enduring Freedom.