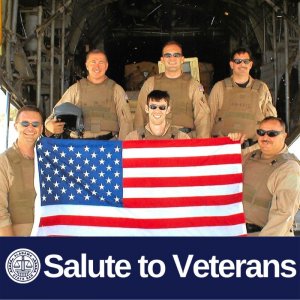 Luke is pictured center on the front row of this photo. He was a C-130 pilot in the 908th Airlift Wing, which is located at Maxwell AFB and went to law school while flying for the 908th. Once during law school, he says he skipped a few days of classes to fly supplies to Haiti after the big earthquake. “I was glad that I was able to support that relief mission to Haiti, and I enjoyed responding to professors asking why I had missed class.” After law school, Luke transitioned to the JAG Corps, working for several years as an attorney in the same unit where he served as a pilot. He retired from the Air Force Reserves in July 2019 and feels very privileged to have been able to serve our country, both as a pilot and as an attorney.