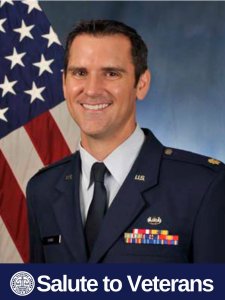 Lt Colonel Howie is an Individual Mobilization Augmentee (IMA) attached to the 100th Air Refueling Wing, Royal Air Force Mildenhall, United Kingdom. In this capacity, he is legal counsel to commanders representing four separate Air Force Major Commands and oversees the provision of legal services supporting more than 16,800 military, civilian, dependent, and retiree personnel. Lt Col Howie entered the Air Force through the Direct Appointment Program on 27 May 2005, and began his active duty service on 3 July 2005. After serving at two different Air Force bases and a deployment to support the war on terror, he separated from Active Duty in September 2009 and entered the reserves. He initially served as an IMA at the 1st Special Operations Wing at Hurlburt Field until 2016 when he transitioned to serve as a reservist in the UK. In his civilian law practice Lt Col Howie represents small businesses and individuals in civil and criminal litigation in Alabama. Lt Colonel Howie teaches Trial Advocacy on the TRIALS team and has been recognized by the National Trial Lawyers as one of the Top 100 Lawyers and as one of Top 40 attorneys under 40.