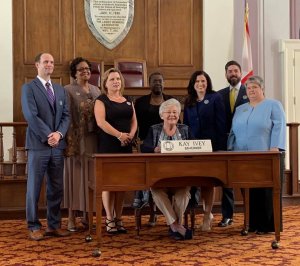 MONTGOMERY – Gov. Kay Ivey on Monday signed a proclamation declaring October 2019 “Pro Bono Month” in Alabama. The Alabama State Bar’s annual celebration, which officially kicks off Tuesday, Oct. 1, is a statewide effort to showcase the impact Alabama’s pro bono lawyers make on the state, its system of justice, and most of all, to the clients they service.

“This celebration shines a spotlight on the extensive work Alabama lawyers are doing by donating their time to help those who need it most,” said Alabama State Bar President Christy Crow. “It’s also an important vehicle to encourage more pro bono volunteers to meet the ever-growing legal needs of our state’s most vulnerable citizens.” Crow, who practices at Jinks, Crow and Dickson, PC in Union Springs, is one of the thousands of Alabama attorneys who dedicate their time to pro bono legal cases and is a former chair of the Alabama State Bar’s Pro Bono Task Force

“Pro bono service represents the heart of an Alabama lawyer and is a centerpiece of the Alabama State Bar’s motto: Lawyers Render Service,” Crow said. Crow’s uniting initiative as president has been “Better Together,” and Alabama lawyers are making their communities better together by providing thousands of hours or pro bono legal services to those in need.

The Alabama State Bar administers a Volunteer Lawyers Program (VLP) in 60 of Alabama’s 67 counties. The VLP has delivered free legal services to low income residents of Alabama for more than 25 years, providing a variety of civil legal issues such as: divorce, child support, bankruptcy, landlord/tenant, veterans’ affairs and credit issues. With more than 18% of Alabamians and 27% of Alabama’s children living below the poverty level, pro bono services are necessary to assist low-income individuals with legal problems.

This month, in celebration of Pro Bono Month, legal aid clinics will be held throughout the state assisting Alabamians who greatly need legal assistance but cannot afford to pay for that help. There will also be several service projects implemented that will help lawyers and law students make volunteer connections with legal aid organizations.

“The legal profession is among the very few that calls on its members to make a difference in their communities through pro bono work,” said Linda Lund, Director of the Alabama State Bar’s Volunteer Lawyer Program.
Although statewide in breadth, Pro Bono Month provides an opportunity for local bar and legal associations to collaboratively commemorate the contributions of America’s lawyers and recruit additional volunteers to meet the growing need.

To learn more about Pro Bono month, visit this page on our website and connect with us on social media.