Legislators returned from spring break ready to close out the session. The legislature met for three session days this week and packed in a full slate of committee meetings as well. Only four session days remain in the 2022 Regular Session. Rumor has it next week will be the last week, and the legislature will Sine Die. There was a big push to move bills out of their houses of origin this week as it takes a minimum of five legislative days to pass a bill. With the end is in sight, many healthy debates and filibusters occurred this week.

On Wednesday, a group of women lawyers who were members of the Alabama State Bar Women’s Section, the Alabama Association for Justice and the Alabama Defense Lawyers Association were at the Statehouse attending both Judiciary committee meetings. They also heard from numerous legislative leaders as well as Lt. Gov. Will Ainsworth and Governor Ivey. They were treated to lunch with Othni Lathram, who discussed the upcoming Constitutional Amendment to update Alabama’s Constitution. 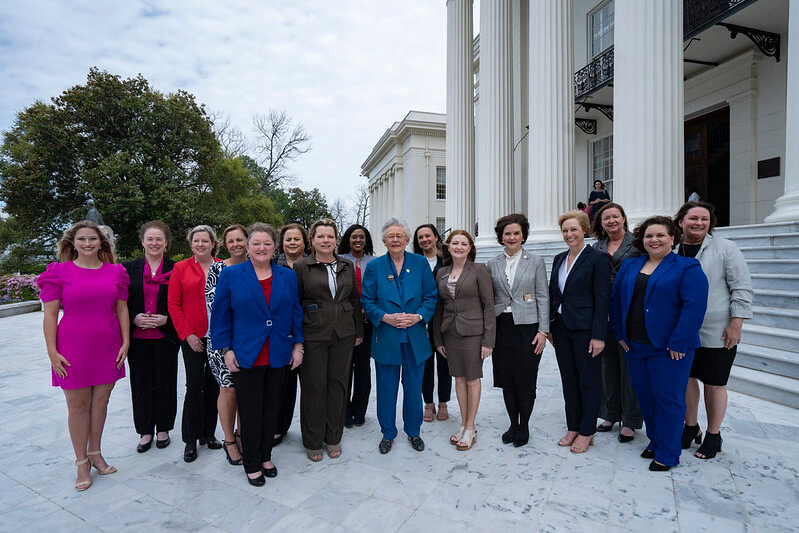 In the Senate Judiciary, lawmakers had lengthy debates on the issue of additional judges needed in certain areas and the options for solutions to the judicial reallocation problem.

Numerous bills were debated, but most importantly, the General Fund budget and the largest Education Trust Fund budget in history are both moving toward final passage. The General Fund budget was sent to conference committee, and then received concurrence in both houses before heading to the governor for signature. Many bills were on the move this week ,so please remember to check the tracking below for bills of interest to your practice area.

The Alabama State Bar provides legislative status reports concerning pending legislation that may be of interest to our members, with direct links to the actual legislation. The reports divide legislation into the following categories for your convenience: criminal, domestic relations, judicial, court costs, elections ethics and government relations (EEGR), civil/ general and tax.

You can find our comprehensive updated bill-tracking spreadsheet here.

The regular session of the 2022 Legislative Session is proceeding as follows: