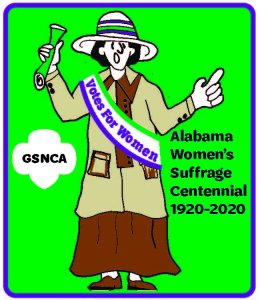 BIRMINGHAM, Ala. – As we approach the 100th anniversary of women’s right to vote in Alabama, Girl Scouts of North-Central Alabama (GSNCA) is excited to announce a new patch program and partnership with Vulcan Park & Museum that honors the legacy and spirit of the women’s suffrage movement. The Alabama State Bar Women’s Section and the Birmingham Bar Association Women Lawyer’s Section will provide this patch program to girl members of Girl Scouts of North-Central Alabama at no cost.

After a decades long fight, women gained the right to vote in 1920 with the passage of the 19th Amendment to the U.S. Constitution. In 2020, Vulcan Park & Museum will lead the year-long commemoration of this significant achievement with its latest exhibit, Right or Privilege? Alabama Women and the Vote. This exhibit and related programming will explore the challenges of suffragists in Alabama, the racial issues that shaped the women’s suffrage movement, and the fight for universal suffrage which continued long past 1920.

GSNCA is a partner organization for this new exhibit and the first weekend of the exhibit (Friday, January 17 – Monday, January 20) will be “Girl Scouts Weekend.” Girl Scouts who visit wearing their sash or vest will receive a $1 discount for entrance to Vulcan Park & Museum, including the new exhibit.

Girl Scouts of North-Central Alabama will be also honoring the history of women’s suffrage in the state with the Alabama Women’s Suffrage Centennial Patch Program. This new patch program, sponsored by the Alabama State Bar Women’s Section and the Birmingham Bar Association Women Lawyer’s Section, is timed to launch in conjunction with Vulcan Park & Museum’s suffrage centennial exhibit, called Right or Privilege? Alabama Women and the Vote.

The patch program is designed for girls K-12 to become aware of the suffragist movement, particularly in the southern states, and learn about women who played important roles in shaping history. Requirements will include learning the history of women’s suffrage, visiting an Alabama suffrage centennial partner event or exhibit such as the Vulcan Park & Museum exhibit, and interviewing a voter.

Since their founding, Girl Scouts have encouraged their members to be civically involved. Today’s youth are more vocal than ever about the change they want to see, and Girl Scouts are the most equipped with the skills needed to make a real impact. The results are proven: girls who participate in Girl Scouts are more than twice as likely to exhibit community problem-solving skills than girls who don’t (57 percent versus 28 percent). Girl Scouts are also more likely to participate in Civic Engagement Activities than non-Girl Scouts. This new patch program builds on a curriculum that helps girls of all ages develop a voice in their communities in a safe, all-girl space.

About The Alabama State Bar

About Girl Scouts of North-Central Alabama

We’re over 13,800 strong—close to 10,000 girls and over 3,900 adults in 36 counties in the state of Alabama who believe in the power of every G.I.R.L. (Go-getter, Innovator, Risk-taker, and Leader) to change the world. Our extraordinary journey began more than 100 years ago with the original G.I.R.L., Juliette Gordon “Daisy” Low. On March 12, 1912, in Savannah, Georgia, she organized the very first Girl Scout troop, and every year since, we’ve honored her vision and legacy, building girls of courage, confidence, and character who make the world a better place. We’re the preeminent leadership development organization for girls and offer every girl a chance to practice a lifetime of leadership, adventure, and success. Girl Scouts of North-Central Alabama is a United Way partner. To volunteer, reconnect, donate, or join, visit www.girlscoutsnca.org or call 800-734-4541.