MONTGOMERY – A rule change took effect Jan. 30, 2020, removing a major barrier for spouses of military personnel who wish to practice law in Alabama. The Supreme Court of Alabama, recognizing the relocation requirements of military families, unanimously approved a military spouse exception to the current reciprocity rule. Now, spouses of military members may be eligible for admission to the Alabama State Bar by showing admission in another jurisdiction and limited practice experience. The military spouse exception is found at Rule III.(A)(5) A of the Rules Governing Admission to the Alabama State Bar. It states the following: 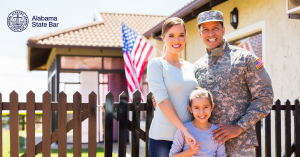 A spouse of a service member in the United States Uniformed Services, as defined by the United States Department of Defense, who is serving on military orders for duty within this State of more than 180 days (that is, Permanent Change of Station (PCS) orders or Temporary Duty (TDY or TEMDU) orders for a period of more than 180 days, or the equivalent thereto) may be admitted to the practice of law in Alabama pursuant to this rule, but need not satisfy the requirements of paragraphs A(1)(c) and (d). All such applicants shall give proof of the qualifications prescribed herein.

Alabama State Bar President Christy Crow, who has prioritized advocating for military families connected to the legal profession, proposed the rule change to the Board of Bar Commissioners. The board unanimously approved the rule change, which provides much-needed flexibility to eligible military spouses without compromising the public protection safeguards of the rule.

You can view the full court’s order and rule change here.

According to the Military Spouse JD Network, 39 states including Alabama have military spouse attorney licensing accommodations and efforts are underway in eight others.