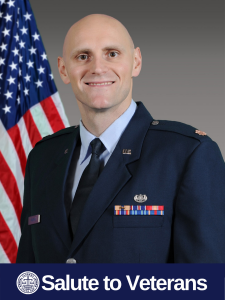 Major M. Arthur “Artie” Vaughn II is the Individual Mobilization Augmentee to the Staff Judge Advocate for the 23d Wing at Moody AFB, GA. In this capacity, he provides ARC support to the SJA who is responsible for providing full spectrum legal services to the 23d Wing in areas including military justice, civil law, legal assistance, operations, and international law. The SJA supervises a staff of 25 active duty, reserve, and civilian legal professionals. The 23d Wing consists of five groups and one detachment with more than 4,700 military and civilian personnel at two locations: Moody AFB, GA, and Avon Park Air Force Range, FL. Moody is the home of the Air Force’s legendary “Flying Tigers” and, Headquarters, 93d Air Ground Operations Wing, which consists of three groups with more than 2,800 Battlefield Airmen at 20 locations throughout the continental U.S. supporting eight of ten active duty U.S. Army divisions.

In 2002, Major Vaughn graduated from Auburn University in Auburn, Alabama, with a Bachelor of Arts in Criminology and Criminal Justice. In 2007, Major Vaughn graduated magna cum laude from Appalachian School of Law in Grundy, Virginia. He received his commission through the Direct Apppointment Program in 2008. He served on Active Duty until joining the ARC in 2019. He also serves as an instructor on the Training by Reservists in Advocacy and Litigation Skills (TRIALS) Team. TRIALS is composed of 30 reservists with extensive litigation backgrounds who coordinate and conduct six trial advocacy courses each year, rotating locating across the Air Force with an emphasis on educating junior active duty judge advocates.

As a civilian, Major Vaughn works for Auburn University as a Title IX and Civil Rights Investigator. In this role, he is responsible for investigating allegations of race, sexual, and gender-based misconduct throughout the Auburn University system which is comprised of 30,000 undergraduate and graduate students and over 5,000 faculty and staff.