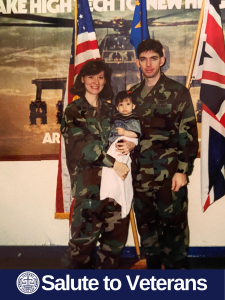 Major Sydney Goodwin Dean
Because her husband was an Army Apache pilot on active duty, Major Dean had the privilege of attending two law schools, University of Texas School of Law and Mississippi College School of Law, before she joined him in military service. After graduation from The Judge Advocate General’s School in Charlottesville, Virginia, she served both on active duty and as an Individual Mobilization Augmentee (IMA).
During her military career she was honored to serve as Chief of Legal Assistance, Senior Trial Counsel, and Acting Chief of Justice for the largest combat contingency force armored division in the free world, First Cavalry Division, comprised of 17,000 soldiers. She obtained extensive experience prosecuting a myriad of criminal cases, including attempted murder and child sexual assault. During military service she also served as Senior Trial Defense Counsel, Director of the Division Tax Program, Victim-Witness Liaison, as well as in administrative, contract, medical malpractice, insurance, and law of war arenas, among others.
After their children were born, the demands of family life combined with Army service became intense for this dual service couple. As the deployment pace picked up after the despicable terror attacks on September 11, 2001, and Mr. Dean again left for war in the Middle East, husband and wife began to prayerfully examine what the future could hold for their daughters if they both deployed at the same time, and, perhaps, did not return. Major Dean made the difficult decision to exit active duty, and eventually, the IMA. Sydney then began serving many years fighting the Battle of the Homefront!
The Dean family eventually settled in beautiful Huntsville, Alabama, where Sydney entered private practice. She continues to serve through her law practice, primarily representing the indigent. For her volunteerism she has been recognized by the Alabama Access to Justice Commission and the Alabama State Bar, among others.
Some of the Army awards she was honored to receive include two Meritorious Service Medals and the U.S. Army Chief of Staff’s Award for Excellence in Legal Assistance – but most importantly the privilege to serve soldiers and their families.
She encourages young people, especially women, to consider serving in the armed forces – saying it is well worth the ride! First Team! Go Army!