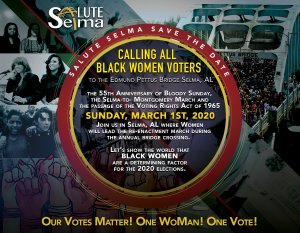 –Salute Selma, Inc. a nonprofit 501(c)(3) organization wants you to join us on sacred grounds as we commemorate the sacrifices and successes of black women from around the country for Selma’s 55th Anniversary of Bloody Sunday, the Selma to Montgomery March and the passage of the Voting Rights Act of 1965 during the Annual Bridge Crossing Commemoration. We want to show the world that our voices matter and will be heard. While celebrating for the first time in history, black women leading this Historic Reenactment March Across Edmund Pettus Bridge!

These amazing days of black liberation and human rights activism will start on Saturday, February 29th, 2020, with an Economic Empowerment Village/Health & Wellness Expo. On Sunday, March 1st, 2020, there will be a Salute to Selma Church Service led by Ministers from across the nation, followed by a Historic “Pre-march Rally,” which will culminate with the Selma’s Historic Bridge Crossing Reenactment! These events are strategically planned a few days before the nations’ “Super Tuesday’s” Democratic Party presidential primaries. The weekend is aimed at invigorating and galvanizing the power of the Black Vote. We invite you to join thousands of influential African Americans in the fields of politics, entertainment, education, and entrepreneurship as we discuss what’s occurring in our nation, and how we should respond.   The 2020 Presidential election has reignited the collective synergy that African Americans have influential power, tenacity and that there is enormous value in our vote.  We stand united in solidarity with Selma for one mission and one goal in 2020!

Salute Selma, Inc., is also excited to announce the confirmation of the National Pan-Hellenic Council, which is comprised of the nine historical Greek-lettered Fraternities and Sororities that will descend in large numbers to participate in the Annual Bridge Crossing Reenactment.  The National Presidents of each Greek-lettered Organization understands the importance of the 2020 Presidential election and are excited to be in Selma and are ready to march in solidarity across the Historic Edmund Pettus Bridge.  Catrena Norris Carter, Co-Founder & National Coordinator for Salute Selma, Inc. feels this is groundbreaking, “It sends a strong message to the world that these organizations whose collective memberships comprise of MILLIONS of this country’s premier black leaders coming together to support, celebrate and speak on the power of the black vote in solidarity, is indeed powerful!”

Once again, Selma will serve as a national backdrop for civil rights and human rights! Abina D. Billups, Co-Founder & Board Chairman for Salute Selma, Inc. said, “In 1965, men and women, young and old, suffered and died for the Right to Vote. Fifty-five years later, extremists are doing everything they can to take away our hard-earned rights, liberties, and power that we have in the Vote,” therefore, she believes coming to Selma should be an “annual pilgrimage.” Especially since every day, a new wave of gut-wrenching developments spurs out of this current White House administration. Blatant attacks on our democracy and daily threats to disenfranchise black and brown people.

We have the Power to Protect our Rights, and we must answer their threats to our way of life. What better place to unite and fight for the right to vote? Who better to come to Selma to help lead the fight?

Please join us. Let us know that you and your organization will join our national movement.

Additional details of the official schedule for Salute Selma’s Inc. Commemoration of the 55th Anniversary of Bloody Sunday, the Selma to Montgomery March Reenactment, and the passage of the Voting Rights Act will be released in January 2020.